The lovely cast of “She Is History”

This play is currently available for full production.  Read more at ShesHistory.com

Synopsis: Reviewed by the Tolucan Times as “a fascinating, albeit skewed view of our beloved fairy tales.”

The ladies of “She is History”

This play is currently available for full production.  Read more at ShesHistory.com

Staging “Portrait of the Widow Kinski”

Synopsis: A promising artist falls into obscurity. Decades later, his widow, once a promising artist herself, works tirelessly to find an audience for his neglected work. A chance encounter yields the possibility of a gallery show and a critical reexamination, but the opportunity to finally secure her husband’s legacy forces her to take a hard look at the past.

Brad and Emilia are scientists in “The 100th Monkey Effect”

Synopsis: Brad and Emilia are mad scientists. They’ve got some songs to sing and stories to tell, and did I mention the most important scientific experiment of all time? If you’ve got a wild side, or just like getting blazed while watching episodes of Quantum Leap, join the scientific research team of the THE 100TH MONKEY EFFECT. 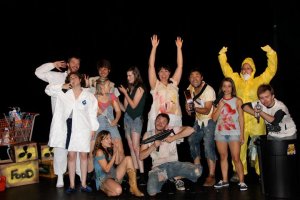 The cast and crew of “Armageddon”

Synopsis: ARMAGEDDON: A NIGHT OF LAUGHS AND PLEASANT SONGS sprung from the sy-fy obsessed minds of three, Los Angeles based writers. Seeking to create an interactive audience experience, ARMAGEDDON combines live music and sketch comedy to explore the important themes of love, life and zombie decapitation.

Katie Muller and Harry Vaughn in “The Lover”

The Persecution and Assassination of Jean-Paul Marat as Performed by the Inmates of the Asylum of Charenton Under the Direction of the Marquis de Sade aka Marat/Sade
2007 Production with Emerson College Department of Performing Arts
Boston, MA

Synopsis: Year 1808, confined in the insane asylum after some of his more flamboyant ‘affairs,’ notorious Marquis de Sade stages the assassination of Marat, one of the French Revolution’s bloodiest leaders. The actors are the other inmates; the audience – the visitors of the asylum. In this play within a play, madness and sanity, violence and affection, theatre and reality blend seamlessly in the shadow box of death, politics and desire.

Synopsis: TWO ROOMS depicts the struggles of a woman whose husband is being held hostage in Beirut Lebanon in the 1980s.  Not too distant in our past, the hostage crisis of the 1983-1990 Lebanese civil war must be reconsidered in light of recent political developments along the coastal Middle East. 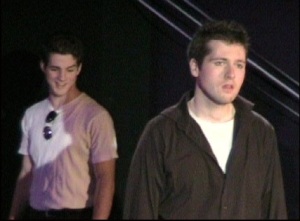 Nick Casey and Kyle Andrews in “The Tragedy”

Synopsis: Adapted from William Shakespeare’s The Tragedy of Romeo and Juliet, THE TRAGEDY tells the tale of two star-crossed lovers named Romeo and Julian.